Some Testimonials from Customers

Beekeeper “N” purchased 3 trays. After fitting one tray to a bee box and transferring bees into that box, Beekeeper “N” went off to fit the other two trays. Upon returning, he remembered he had not filled the tray with lime and was amazed to find 40 beetles had already been caught. 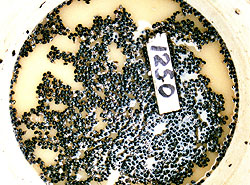 The next morning Beekeeper “N” checked all 3 trays and started counting up to 100 before giving up on the count. Beekeeper “N” thought he would lose one particular hive because of beetle infestation, but after fitting the tray, the Queen bee began laying and the hive recovered.

Beekeeper “T” had 40 hives in full production prior to identifying the small hive beetle. He lost 30 hives before fitting the trays and saved 10 hives using BEETLTRA.

Beekeeper “C” lost 48 of 100 hives before purchasing BEETLTRA. His beetle count for one hive after 3 days was 80 beetles and several grubs caught and killed.